Scientists from Israel have recently explored the effectiveness of two-dose and three-dose regimens of the BNT162b2 coronavirus disease 2019 (COVID-19) vaccine (Pfizer/BioNTech) to reduce viral load in breakthrough infections caused by the delta variant of severe acute respiratory syndrome coronavirus 2 (SARS-CoV-2). Furthermore, they observe that the gradual reduction of vaccine efficacy against viral load as a function of time since the last vaccination could be regained through a third booster dose. The study is currently available on the medRxiv* preprint server while awaiting peer review.

The delta variant of SARS-CoV-2, which was first detected in India, has caused a sudden resurgence of new infections in many counties across the globe, including Israel. Despite high vaccine coverage, Israel has faced an exponential rise in infection rate in summer 2021 when the delta variant was predominantly circulating in the entire country.

The mass vaccination programs in Israel include the BNT162b2 vaccine, which is highly effective in reducing SARS-CoV-2 infection and symptomatic COVID-19. The vaccine also effectively reduces viral load in breakthrough infections, justifying its potency against disease severity and infectiousness. However, the increasing number of breakthrough infections has raised concern over waning vaccine efficacy with time. Given this possibility, Israel has initiated a third booster vaccination program in August 2021 to curb viral transmission.

In the current study, scientists have investigated the impact of a third booster dose of the BNT162b2 vaccine on viral load in breakthrough infections. Their analysis specifically included adults aged 20 years or above who had been infected with SARS-CoV-2 during June – August 2021, when the delta variant was dominant in Israel.

By comparing infection data with vaccination data, they have identified a total of 11,889 infections; of which 1,910 were in unvaccinated adults, 9,734 were in adults vaccinated with the two-dose regimen, and 245 were in booster-vaccinated adults. 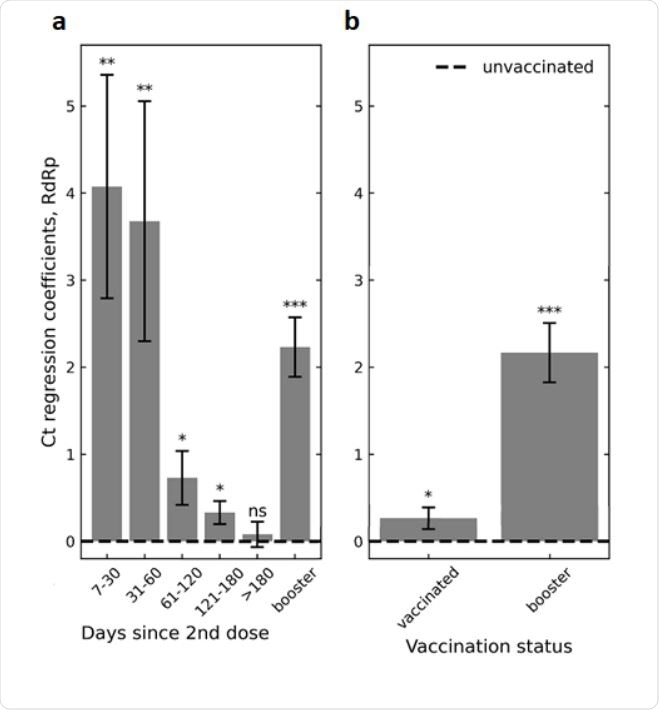 Association of infection Ct with 2-dose vaccination and with the booster. a, Ct regression coefficients, indicating an infection Ct relative to the unvaccinated control group (dashed line), show an initial increase in Ct in the first two months following the second vaccination dose, which then gradually diminishes ultimately vanishing for infections occurring 6 months or longer post-vaccination. Increased Ct is restored following the booster (right bar). Coefficients were obtained by multivariate linear regression analysis adjusting for age and sex (Methods). b, Same model as in (a) but without binning post-vaccination times. Since most of the vaccinated population during the current surge are more than 2 months post their second vaccine shot.

The findings revealed that the two-dose regimen of the BNT162b2 vaccine is highly effective in reducing viral loads of delta breakthrough infections during the initial two months post-second dose vaccination. Compared to unvaccinated individuals, vaccinated individuals exhibited 15-fold lower viral loads, which is similar to that observed in breakthrough infections by non-delta variants. However, the protection against viral load started reducing after two months of the second vaccine dose, followed by a complete diminution after 6 months.

Importantly, a recovery from waning vaccine efficacy was observed after administration of the third booster dose of the BNT162b2 vaccine. Specifically, the third vaccination caused a more than 4-fold reduction in viral loads.

The analysis covering the entire population revealed only a small difference in viral load between vaccinated and unvaccinated individuals. This could be because when the delta variant became dominant in Israel, a large proportion of the vaccinated population had already passed the initial 2-month period post-vaccination.

The study reveals that the two-dose regimen of the BNT162b2 vaccine is effective against severe COVID-19 and infectiousness for a short period of 2 months. However, the vaccine becomes ineffective six months post-vaccination. Importantly, this waning efficacy could be regained by a third vaccine dose, which should be administered at least five months after the second vaccine dose. Further studies are needed to evaluate the long-term efficacy of the booster vaccination.

As mentioned by the scientists, one limitation of the study is considering viral load as a measure of disease severity and infectiousness. Although regarded as a common proxy, viral load obtained from a positive polymerase chain reaction (PCR) result is not necessarily an indicator of infectious virus.

Few-foods diet leads to a significant decrease in ADHD symptoms