The severe acute respiratory syndrome coronavirus 2 (SARS-CoV-2) emerged in late 2019 to cause the most devastating pandemic of recent times, called coronavirus disease 2019 (COVID-19). With over three million deaths so far and hundreds of thousands of infections occurring every single day, the virus has proved challenging to control.

Most infections are asymptomatic for a long period of time, and this contributes to their rapid and extensive spread. Secondly, even from the early days of the pandemic, it was clear that some people are more likely than others to infect a large number of other people – in so-called superspreading events.

A new study published in the Proceedings of the National Academy of Sciences shows that the vast majority of the viral load in a community at any given point is present in a very small minority of the infected population, underlining the vast differences in viral loads between individuals.

The researchers looked at COVID-19 testing data on a college campus during one academic semester, where dormitory residents were being tested weekly, along with people being tested at campus testing sites. All people were asked about symptoms, and only asymptomatic individuals were allowed to give saliva samples for testing. Thus, the tested cohort was completely asymptomatic or presymptomatic when the samples were collected.

The findings of this study relate entirely to the earlier SARS-CoV-2 variants, before the UK variant, and other variants of concern (VOCs) came into the picture. Over 72,000 specimens were tested by quantitative reverse transcriptase-polymerase chain reaction (qRT PCR) for viral genetic material.

The researchers adapted their methods to ensure that viral loads were correctly quantified even when very high, with the cycle threshold (Ct) values showing a linear increase with dilution.

What were the findings?

There were about 1,400 positive samples, mostly unique. The Ct values of these specimens showed an average viral load of 2.1 × 107 virions per mL or 5.9 × 106 virions per mL, depending on the primer used. The highest viral load in this study was 6.1 × 1012 virions per mL, and was found in only one sample. Interestingly, the tested individual was completely asymptomatic at testing.

The lowest viral load was eight viral particles per mL. Thus, there is a wide range of viral loads between infected asymptomatic individuals. The primer used (nucleoprotein and envelope protein) did not affect the results as long as the Ct value was below 30. 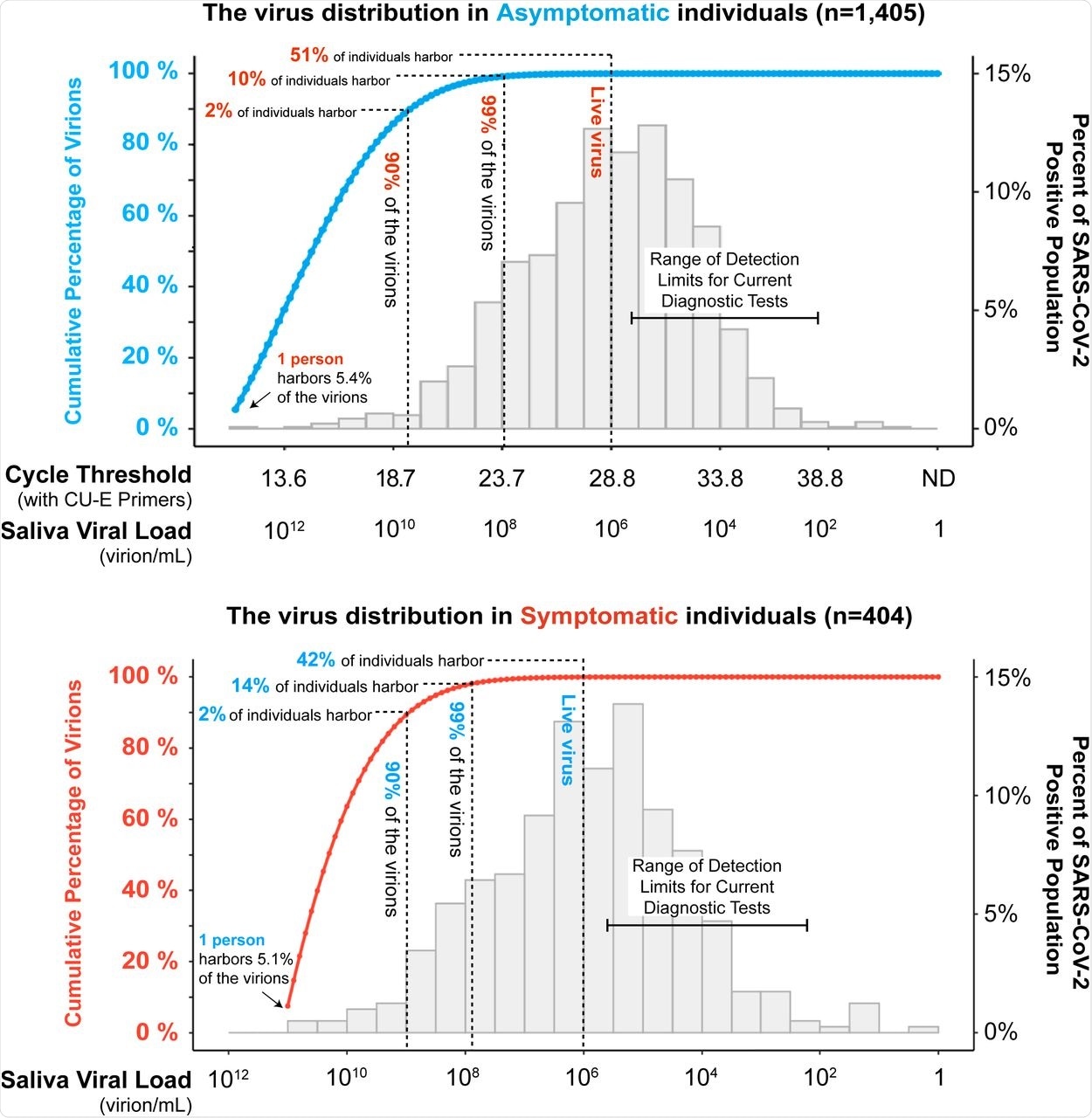 A small percentage of individuals are viral supercarriers. The histograms shown (right y axes) are the same as were shown in Fig. 2. Starting from the left of each histogram (i.e., those individuals with the highest viral loads), we calculated the accumulative percentage of total virions as a function of saliva viral load based on the probability density function of the distribution (blue and red lines, and left y axes). In both asymptomatic (blue line) and symptomatic populations (red line), the portion of population that harbors 90% and 99% of the circulating virus is highlighted by the dashed lines. We estimate that only around 50% (51% and 42% in the panels shown) of individuals who test positive for the virus actually harbor infectious virions, based on the observation that live virus has rarely been isolated from samples with viral loads of <106 virions per mL (28, 30–35). For context, the range of detection limits of common SARS-CoV-2 diagnostic testing paradigms (qRT-PCR, antigen testing, and reverse transcription loop-mediated isothermal amplification) are shown. All testing paradigms will capture virtually all infectious individuals and virions, in presymptomatic and symptomatic populations alike.

At higher Ct values, indicating lower viral loads, the correlation between the results obtained with the two different primers was weaker because of unpredictable changes in the reverse transcription process or at the early steps of the PCR process.

The envelope-primer results were used because they showed the highest agreement with the results of a subset analysis using eight different primers commonly employed in testing.

Surprisingly, the results showed that symptomatic status does not influence the average viral load of a population. Again, despite the wide range of viral loads in symptomatic patients, the mean was 2.5 × 107 virions per mL.

The importance of supercarriers

The mean viral load distribution in this study resembled that of another hospital cohort. This similarity was clearly observable, even though the latter is likely to have been collected later in the course of the infection after the patients became symptomatic.

The pattern common to both cohorts is a highly asymmetric distribution of viral particles. In other words, the vast majority of the viral particles in circulation were carried by just 2% of infected individuals, whether symptomatic or asymptomatic.

Conversely, the sum of the viral particles carried by all those with salivary viral loads less than 106 virions per mL, comprising half of the whole tested population, represent only 0.02% of total virions.

What are the implications?

It is almost automatic to infer that individuals who carry very high viral loads – supercarriers – are likely to be superspreaders as well. However, the exact relationship between viral load and infectiousness is still unknown.

Earlier studies reveal that once the viral load is below 106 virions, viral isolation is not generally possible. Thus, very high Ct values may reflect viral genetic material being shed as part of the general disposal of injured tissue during the healing process rather than part of the productive viral replication cycle.

This may mean that people with very low viral loads are probably not infective to others. This would then cover half the people who had positive tests.

Nonetheless, those who harbor high viral loads are more likely to spread the virus to others, as earlier studies have shown. This study confirms the results of contact tracing studies, which suggest that less than a tenth or a fifth of infected individuals are responsible for 80% or 90% of all infections.

The findings would also explain why those living together in the same room, or attending school, or living in the same household, as an infected individual are not always infected. Only those with viral loads beyond a certain limit actively transmit the virus, and these make up only a fraction of the total number of infected individuals at any time.

This could be due to possible large variations in the relative time points at which samples were tested following infection. The validity of this hypothesis is however undermined by earlier longitudinal studies which have demonstrated a marked difference in the peak viral loads between different infected individuals.

The most convincing explanation is that viral replication occurs at different rates in different individuals. The underlying reasons may relate to different types or levels of immune responses, host factors such as ACE2 expression, the viral variant, the site of viral entry or the infecting dose.

The most important takeaway from this study is that if viral supercarriers could be isolated prior to the onset of symptoms, the epidemic could be contained much more easily. However, since asymptomatic individuals rarely ask to be tested, large-scale screening in healthy populations will be required to identify them.

Further, it is of paramount importance that the PCR results are obtained as soon as possible in order to avoid transmission until the status is known. Thus, it is imperative that current models of surveillance and diagnosis be used in order to identify most if not all infected individuals, as well as to determine who is carrying the bulk of circulating viral particles, as well as inform them of their infection as early as possible after testing (and infection).