A new study published on the preprint server medRxiv* in October 2020 shows that recognizing the differences in the population composition, connectedness and distribution, as well as inter-individual differences in immunity, susceptibility and infectivity, are crucial to estimating the herd immunity attained as a result of natural severe acute respiratory syndrome coronavirus 2 (SARS-CoV-2) more accurately. This knowledge is crucial in shaping sensible containment policies for the future.

In the traditional model of infectious disease, contact between people is assumed to occur homogeneously between age groups and different parts of the country. It also does not account for individual variations in terms of infectivity and susceptibility to the virus.

Thus, newer models attempt to incorporate heterogeneous mixing, recognizing that for most people, social interactions occur within a relatively small circle confined by similarities in age and location. The number of people who move across the boundaries of these groups is low.

The conventional calculation for detects the threshold above which the infected percentage of the population (the proportion that has been removed from the susceptible fraction) is large enough to prevent enough new infections from occurring such that the epidemic can propagate. Thus, the herd immunity threshold (HIT) indicates a value for the level of population immunity that will keep further outbreaks from occurring. The classical threshold for herd immunity is expressed as 1 – 1/R0 (R0 being the reproduction number).

The flu pandemic of 1918 is thought to have had an R0 ~2.9, corresponding to a herd immunity threshold (HIT) of about 66%. Again, most scientists consider that herd immunity for COVID-19 requires that 60% or more of the population being infected for an R0 of 2.5. However, in reality, the HIT in 1918 was probably closer to 33%, since only a third of the population of the world is actually thought to have been infected.

The H1N1 influenza pandemic of 2009 was estimated to have an R0 between 1.2 and 1.6, corresponding to a HIT of 28.5% based on the classical model. This is in contrast to the CDC’s estimates that show that only a fifth of the U.S. population was infected before the pandemic died out.

These overestimates are based on the assumption implicit in traditional models that the susceptible population and mixing patterns are homogeneous. 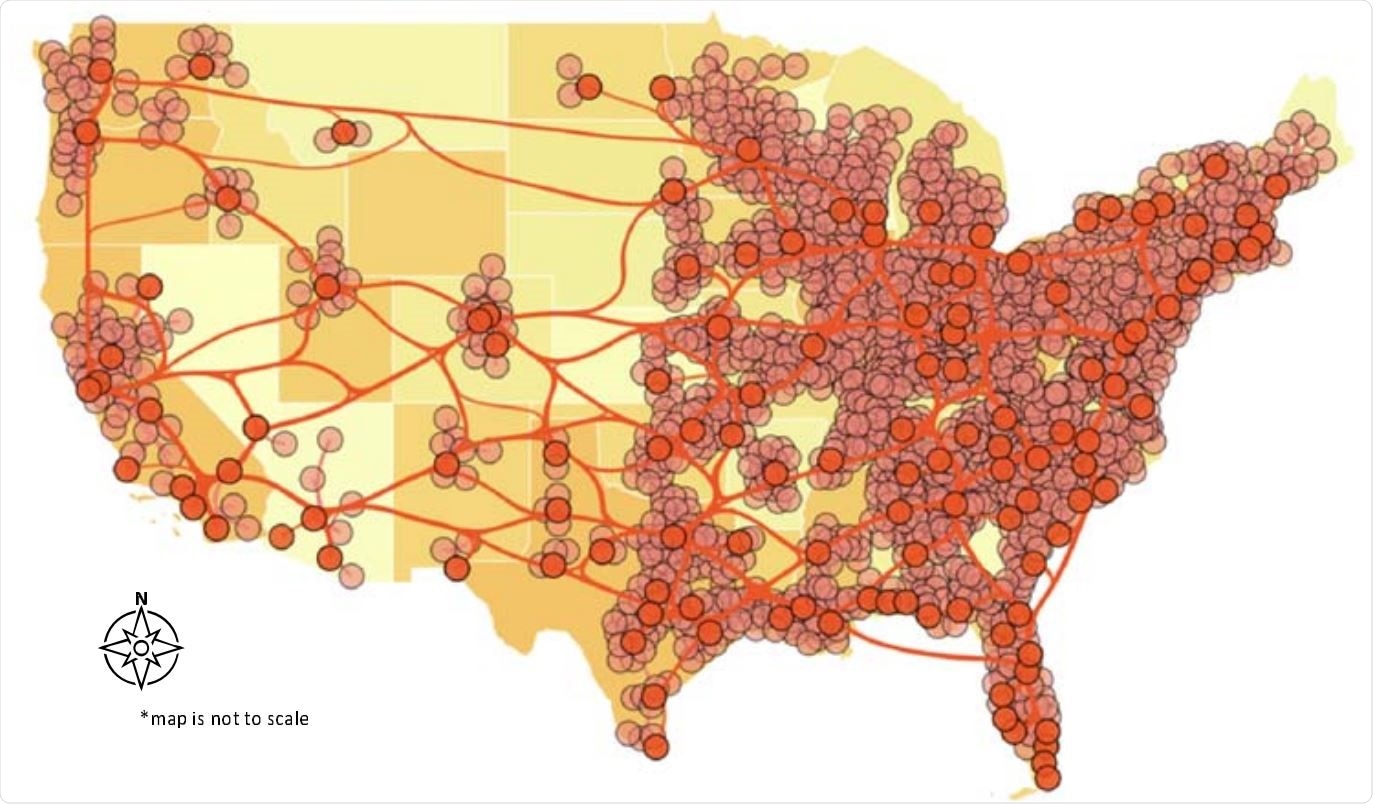 The network underlying the model.

The current model looks at how differences in the spatial distribution and immune status of susceptible individuals impact herd immunity. This has been brought to the forefront of the debate over the actual HIT by earlier researchers.

Many uninfected individuals have T cells that cross-react with SARS-CoV-2 because of earlier annual coronavirus exposures. In fact, 9 out of 10 people have antibodies to coronaviruses at some point in their lives, though they may last anywhere between months to as long as 34 years.

At present, some investigators estimate a 35% prevalence of helper T cells due to prior exposure to these common coronaviruses, and it is, therefore, necessary that the role played by these cells in the context of clinical severity and outcome be studied.

The existence of innate immunity to the disease is another factor to be evaluated. Such individual variation contributes to the final estimate of the HIT.

An earlier two-compartment model with one group being immune to the virus as a result of innate or cross-reactive immunity indicates that the size of this group in relation to the other, along with the R0 value, and the degree to which both groups mix, will cause marked variations in the HIT. The authors suggest that some locations may well have achieved herd immunity already. A modified form of this model is also used in the current study to represent the role of partial immunity.

The current study first visualizes the use of uniform non-pharmaceutical interventions (NPIs) such as sheltering at home and other measures, during the whole course of the epidemic. They seek to find a value for the level of NPIs required at minimum to ensure that the first wave achieves herd immunity at its conclusion, preventing a second wave.

The infected proportion of the population is then calculated as the disease-induced HIT. According to this model, the HIT will be ~47.5% vs 77% with the classical model. This is reflected in the results of serological testing on a large scale in New York City, which was hard-hit by the pandemic. The antibody tests showed a prevalence of 27%, ranging from ~13% to ~52% in various locations.

A second estimate considers the possibility of cross-reactive T cells in about 35% of the population, speeding up recovery by one day and reducing mortality by 10% vs. the non-immune population. This reduces the disease-induced HIT estimate to ~34%.

The researchers point out the importance of such calculations: “Even modest heterogeneity in infectiousness and duration of the disease course impacts the levels of disease-induced herd immunity.”

The simplistic homogeneous mixing model, which also infers equal infectivity for all individuals in a population, has given rise to many public health strategies that target all individuals in a population similarly. On the contrary, say the authors, better models are needed that take account of differences in a number of areas, including susceptibility, mixing, and infectivity.

Targeting very connected or susceptible or infectious individuals in each location by immunization, since they are central to further disease transmission, is key to preventing a second wave, suggest the authors.

Today, many seroprevalence studies continue to prophesy that the achievement of herd immunity is not yet within sight, based on the low prevalence and widely varying range by locality. The current model suggests that this is, in fact, what is expected of a population. Of course, antibody testing itself is limited by a lack of sensitivity in the early convalescent phase, variable test quality, rapid decline in antibody titer, and increased antibody titer with disease severity.

In Manaus, Brazil, where the pandemic took a heavy toll, both hospitalizations and deaths from COVID-19 have dropped steeply, though the seroprevalence has never risen above 20%. This could mean that a low level of antibodies is compatible with herd immunity in some places.

Other investigators support the view that heterogeneity in contact networks and in the degree of transmission allows a much lower HIT than previously assumed. Shielding of highly connected nodes may lead to a rebound increase in infections following the relaxation of such restrictions, with the second wave being more significant than the first.

The investigators sum up: “We demonstrate that the proportion of the population infected to achieve herd immunity may be lower than usually assumed, which would have significant implications for public health.”

The study needs to be followed up with a quantitative exploration of the level of herd immunity and turn these insights into good use in public health strategies that target the most central transmission foci in each locale.

Computer use in midlife may prevent cognitive decline