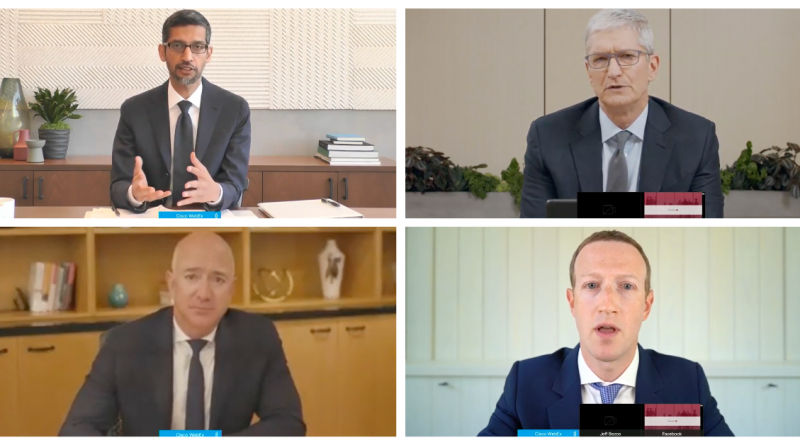 Gary Reback is perhaps best known as the lawyer who helped convince the U.S. Department of Justice to bring an antitrust lawsuit against Microsoft in the 1990s. He watched the majority of the House Judiciary Committee hearing earlier this week with Amazon CEO Jeff Bezos, Apple CEO Tim Cook, Google CEO Sundar Pichai, and Facebook CEO Mark Zuckerberg. Reback still remembers a Senate hearing that put pressure on the government and led to the filing of United States v. Microsoft Corporation in 1998. That’s why he focused more on lines of questioning this week than on answers from CEOs of companies that have amassed unprecedented wealth and power.

“To me, the core turning point was right at the beginning, basically,” he said, pointing to sharp and detailed questioning in reference to a range of documents obtained in the course of the committee’s assessment.

The question on Wednesday was whether tech giants have grown too powerful, and if you watched the hearings, many members of Congress leave no doubt that they believe the answer is yes. In his opening remarks, for example, U.S. House Antitrust subcommittee chair David Cicilline (D-RI) said tech giants enjoy the power to pick winners and losers in the private market and that consumers have “no escape from surveillance” because there are no alternatives. He added “What’s at stake is whether we let ourselves be governed by private monopolies.”

VentureBeat spoke with Reback and other antitrust experts about what stood out during the hearing and what should happen next. Each favors some form of action or legislation to address the litany of anticompetitive practice allegations that emerged over nearly six hours of testimony.

‘We may have run out of options’

During the hearing, a number of Democratic lawmakers argued that Washington needs to take steps to ensure a fair market. Rep. Jim Sensenbrenner (R-WI) insisted that existing antitrust law is fine but needs enforcement. Reback pointed out that convoluted antitrust law makes it difficult to bring cases to court. He said Sensenbrenner was correct in the sense that new legislation might not have been necessary if action had been taken earlier, but he stressed that there isn’t much antitrust enforcement happening today.

Reback blamed the outsized growth of tech giants in part on the Obama administration’s failure to take action. Nobody who understands antitrust law would suggest implementing restrictions cavalierly, Reback said, but regulators have already waited so long that it’s tough to see any viable alternative to reform.

“By not doing anything for so long, we may have run out of options,” Reback said. “The way anticompetitive practices work, if you deal with them quickly, if you deal with them in a rifle shot, you fix it and the companies go on competing and everything’s fine. But if you don’t fix it, then market power builds up and builds up and, in the case we have here, there are no competitors basically for at least three of these companies. They bought their competitors, put them out of business, whatever. And so that then is a problem in terms of how you expect a free market to fix this.”

For context: Apple reported nearly $60 billion in profits and became the world’s most valuable company on Friday. On Thursday, Amazon reported revenue up 40% to $88.9 billion, while Google’s parent company Alphabet and Facebook reported revenue above analysts’ estimates.

Each of these companies has been accused of anticompetitive practices that harm democracy, consumers, and small businesses. And each enjoys majority control in a number of industry verticals in the U.S. (and much of the world). Areas of dominance include:

Stacy Mitchell is codirector of the Institute for Local Self-Reliance (ILSR), a nonprofit organization that champions distributed, local control over corporate power. She found the committee to be very knowledgeable about how the four companies conduct business and argued that Amazon has a monopolistic hold on small businesses. Last week, Mitchell resigned her position as a fellow at the Yale University Thurmond Arnold Project, a group studying antitrust issues, after finding out that director Fiona Scott Morton is a paid advisor to Amazon and Apple. ILSR also researches Amazon’s anticompetitive practices and advocates breaking the ecommerce giant into separate companies.

Mitchell watched the hearing with interest.

“I found it thrilling, really,” she said. “Like, ‘Oh, this is what it looks like when a democratic government actually addresses fundamental issues of power and control and … takes an aggressive stance toward CEOs and really in some ways alters the power dynamics.’”

She said an exchange between Rep. Mary Gay Scanlon (D-PA) and Jeff Bezos during this week’s antitrust hearing demonstrated the need for this kind of intervention. Under questioning, Bezos confirmed that the Buy Box algorithm favors products shipped with Prime and Amazon fulfillment services. Bezos also said Amazon ties the use of its fulfillment services to winning the Buy Box. Mitchell highlighted the obvious pressure this puts on sellers. “This is a pretty serious matter because effectively what Amazon has done is it has compelled sellers to use Amazon’s fulfillment services in order to get the kind of placement on the site that actually results in sales.”

Scanlon also cited a report ILSR released last week that found Amazon pockets about 30% of sales from independent sellers, up from 19% five years ago. The fee brought in nearly twice the revenue Amazon Web Services did in 2019, and Mitchell said Amazon uses the money to subsidize other company divisions and dominate new industry verticals. That’s part of why ILSR supports breaking major Amazon divisions into individual companies.

Bezos said Wednesday that he “cannot guarantee” Amazon employees have not used data about independent sellers to create the company’s own products, which would be a violation of company policy.  Lawmakers argued this practice undercuts small businesses that have no option but to sell their goods on Amazon’s online marketplace. The Wall Street Journal reported in April that Amazon employees used data about individual sellers to create competing Amazon products.

During the hearing, Apple, Facebook, and Google were also accused of stealing ideas from other companies. (Each of the tech giants has growing investment fund arms.)

“Three of the companies [Amazon, Facebook, and Google] basically have the same set of accusations against them, which is that competitors come on your platform, you take their information, you preference your own results, compete against them, drive them out of business, or buy them cheap,” Reback said.

Both Mitchell and Reback repeatedly emphasized the contrast between the tone of the hearing Wednesday and congressional hearings held in 2018 following the Cambridge Analytica scandal with Mark Zuckerberg. In that earlier hearing, members of Congress demonstrated an inability to understand technology or how Facebook applications work.

What seemed to be missing back then, Mitchell and Reback said — but could be seen in exchanges Wednesday — was the ability to ask followup questions. Without a grasp of how a company operates, or its products and services, any line of questioning will yield little beyond the initial question. CEOs can then run out a portion of the five minutes allotted to each elected official by explaining technology or offering platitudes about how much their companies value things like privacy.

Mitchell said the recent antitrust hearing had a different tone. “This clearly was proceeding as part of an investigation … and sort of had the feel of ‘We’ve gathered all this data or information, and the process is that we’re going to give you a chance to answer for it,’” Mitchell said.

Sally Hubbard is director of enforcement strategy at the Open Markets Institute and testified before a House Judiciary subcommittee on antitrust at its first big tech hearing in June 2019.

Last summer, Hubbard testified that Facebook and Google use their digital advertising monopoly in multiple ways to disadvantage independent journalism and newspapers that are deemed competitors. Both companies directly compete with the free press for attention while controlling the main traffic highways of search engines, smartphones, and social media. She said the hearing Wednesday in part restored her faith in democracy and institutions and gave her hope that meaningful action is possible.

“To me, it was the most impressive hearing that I can remember seeing in my lifetime of the members of Congress being so highly prepared, so in-the-know about complex issues, and willing to take on the most powerful companies in America and the world,” Hubbard said.

Hubbard said she could see the rollback of acquisitions like Google’s AdMob and DoubleClick or Facebook’s acquisition of Instagram and WhatsApp as part of potential solutions, but she pointed out that such measures aren’t the only option. She wants lawsuits filed when anticompetitive behavior like the kind described in the hearing occurs, ongoing monitoring of exclusionary conduct, and scrutiny of mergers, especially acquisitions of small companies that may be viewed as a competitive threat. She also recommended passing legislation to support Senator Elizabeth Warren’s (D-MA) suggestion that you can own a platform or sell goods on it, but you can’t do both.

“If we can’t get antitrust enforcement on [these companies] … we need legislation like the type Elizabeth Warren is suggesting, where if you own the platform then you can’t own anything on it. That would be a big change, but if there’s no way to police the [current] situation so that competitors get a fair shot and you don’t run everybody else out of business by using their data against them, if there’s no way to police that, then you don’t have any alternative but new legislation,” he said.

On the topic of the digital ad market’s negative impact on journalism in the United States, Rep. Pramila Jayapal (D-WA) talked Wednesday with Google and Alphabet CEO Sundar Pichai about Google’s AdExchange operating in a way that resembles insider trading, adding in the context of independent news outlets.

There’s nothing revolutionary about stopping a single company from controlling both sides of the market to prevent adverse outcomes that resemble insider trading, and it’s past time to bring the same concepts to the digital economy, Hubbard said.

Mitchell concluded that the hearing itself was just one step in the process and the committee’s final report will convey the actual substance of the debate. 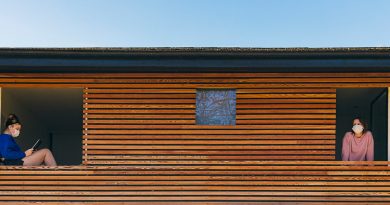 AI Weekly: When to ship or shelve a coronavirus solution 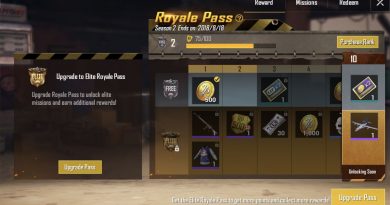 Sensor Tower: PUBG Mobile is the king of battle royale on smartphones