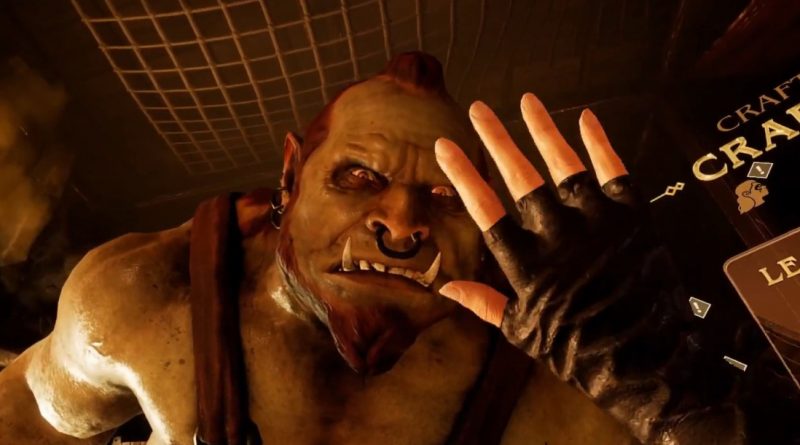 The day has finally arrived: Asgard’s Wrath, the massive new action-adventure VR role-playing game from Sanzaru Games and Oculus Studios, is officially released for Oculus Rift. UploadVR has already played it and published its full review, so this guide will specifically focus on tips and strategies to help new players get started.

Asgard’s Wrath is an incredibly dense game. It took me around 25 hours to finish the main story and that’s without venturing off the main path very often. Across the entire adventure it spans six different sagas, or chapters, and lets you take control of five different mortal heroes each with their own unique playstyle, gear, and special abilities.

We’ll assume that you’re jumping into the game pretty fresh at this point and run down everything you need to know, especially things we wish we had known, to get started.

Don’t be afraid to experiment

Each hero will have a handful of “Hero Gear” items in Asgard’s Wrath that always return to them and are indestructible, such as Ingrid’s sword or Frodi’s staff. While these weapons are great to rely on, don’t be afraid to experiment. Sometimes the weapon that an enemy drops, although not indestructible, is still very powerful and good to use to make quick work of enemies. Later on in the game many of these dropped weapons will have status properties that do lightning, fire, poison, or some other type of extra damage.

It’s also just lots of fun to lop off someone’s head, grab their sword, then chop off another enemy’s arm all without skipping a beat. Definite badass material.

If you’re playing on either medium or hard difficulty then you’re gonna need to master parrying very quickly. Enemies are generally classified in four different ways in Asgard’s Wrath: standard enemies with just a health bar, Runic Armor enemies that have extra shield bars, boss enemies that are large and pack devastating attacks, and full boss encounters (there are only three of these in the whole game.)

Standard enemies you just need to hit them to lower their health until they’re dead. That’s it. Parrying is handy to deflect attacks but not needed. The other class of enemies, the ones with Runic Armor (blue bars above the green health bar) are where things get tricky. You’ll need to parry, block, or dodge standard and heavy (red glowing) attacks to build up the enemy’s rage meter (thin red bar beneath the green health bar) to then trigger a Signature Attack (their eyes glow red and there’s a blue glow around the weapon) which must be parried to stun the enemy. Once stunned you can attack to remove the Runic Armor bar and start dealing normal damage.

If you’re playing on Easy however, you don’t need to parry but it will help speed up some encounters if you don’t want to chip away at health bars.

Some status effects in Asgard’s Wrath like being frozen or on fire are tough to ignore, but I found the combat so intense and active that it was easy to miss the slow damage-over-time effect. If you look down with your eyes you’ll see your health at the bottom of the HUD and if you’re taking damage the number is, obviously, going down.

But on the flip side, you can use these against enemies too. Even if you haven’t broken their Runic Armor you can use status effects like poison and lightning damage to hurt their health beneath the armor directly. Some followers are particularly good at this, such as the owl, who can shoot crossbow bolts from a distance for a steady barrage. 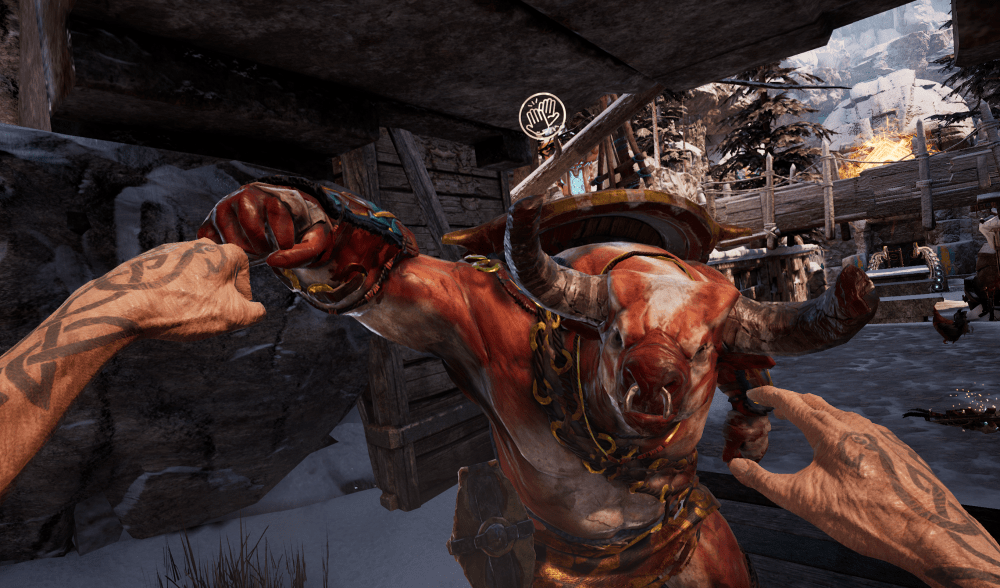 Above: Maybe it’s not a good idea to get into a fistfight with a Minotaur.

You should always stay friendly with your followers. Keep them happy by regularly feeding them, making sure they don’t die, and giving a thumbs up, high-five, or fist bump — just typical stuff you do with any animal.

Leave no barrel unbusted, crate unbroken, or pot unsmashed. They almost always have crafting resources inside and every treasure chest has something useful. When you go back to the tavern just sell everything you don’t need (like body parts or weapons you don’t like) and store the rest in your stash.

Every time you visit the blacksmith or merchant to craft something Asgard’s Wrath will automatically pull from your stash as well as your inventory for all ingredients.

Speaking of which, you should stop by the blacksmith often. Don’t just wait until the end of a hero’s saga because at that point you don’t really need to play that hero again unless you want to do side content as them. But if you upgrade during the saga at every other checkpoint or so then you’ll steadily improve over the course of all of their quests.

Always have meads and potions handy

In a lot of RPGs I stockpile items until the end and just never use them. I encourage you not to do that in Asgard’s Wrath. Health does not recover for your followers or you, at all, other than by eating food and drinking potions. You can craft potions back at the tavern, but can only hold 10 at a time. I’d recommend saving those and if you hit your limit give extras to followers to keep them topped off.

Generally speaking I’d recommend crafting potions and meads as a first-priority every time you visit the tavern. Especially Frenzy Meads. When using these your follower activates their Frenzied state which enables their special ability. Hulda the turtle, for example, taunts all enemies towards her while raising her shield while the shark can do a corkscrew attack to shred through Runic Armor easily — this one’s great for boss fights. 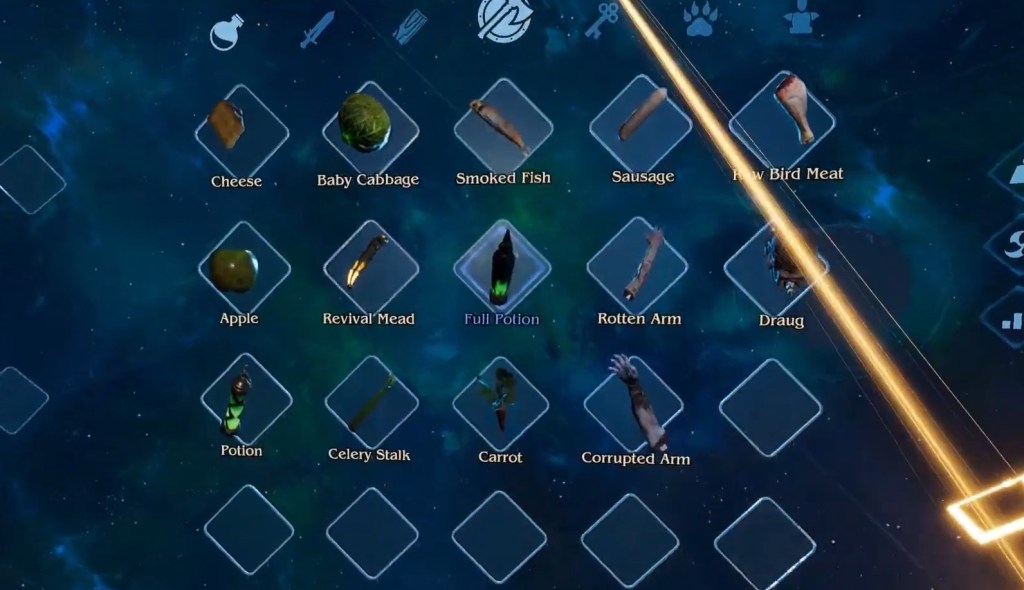 Above: Inventory management is important — you’ll find a lot of loot!

There are three main inventory sections: consumables, weapons, and materials. They all have their own pages and own storage capacities. The other icons at the top are Hero Gear, key items, followers, and heroes. Hero Gear, as explained earlier, are the iconic and persistent weapons unique to each hero that you unlock. Key items are things like keys for chests, handles for levers, or various dragon horns that you can craft to bypass large creatures blocking paths — among other things.

Usually you don’t need to actually look through the inventory to use a key item, most of the time Asgard’s Wrath just understands what you need and lets you pick it out of the air to use in the moment it’s needed.

These little gnome fellas will pop up at various stages throughout the game with a riddle. If you can decipher it (usually the answer is a consumable or material found in that region) and you give it to him then you’ll get some cash and a golden needle. You can exchange golden needles for inventory space upgrades at the merchant back at the tavern.

Venture off the beaten path

Asgard’s Wrath is a game just as much about exploration as it is defeating powerful god-like enemies. The main quest took me around 24 hours to finish, but I couldn’t help but venture off the main path every now and then. If you do so often you’ll find lots of valuable crafting materials for upgrades, tons of side quests and puzzles, and in some cases large, separate dungeons that are entirely optional with their own storylines and special high-profile rewards.

Since this is also heavily inspired by Metroidvania-style games, there is big incentive to re-explore areas after you get further in the game because new paths will become accessible as well as new content you didn’t see the first time through.

Avenge fallen players every chance you get

Above: Avenge the fallen!

One of my favorite entirely optional bits of Asgard’s Wrath is the fallen hero system. When a real-life player dies in Asgard’s Wrath the game logs that location and stores it with a chance for other players to come across it in their game. When this happens a ghostly purple apparition appears, along with the player’s actual Oculus ID, issuing a challenge to avenge them.

If you complete the combat challenge you’re awarded Yggdrasil seeds which can be used to sprout faerie blessings back at Yggdrasil (the giant tree) that grant you permanent buffs. Some of them are super helpful like offering a chance to replenish potions when drinking one or lowering the relationship penalty for a follower’s death.

Read the codex at Aegir’s Tavern

Back at the tavern there is a giant floating book hovering over the fire. If you flip through it then you can not only find out about some classical Norse mythology not specifically covered in the game’s narrative, but you’ll also find out new details like intel on enemies as well as what each of your follower’s like best as their favorite food. All followers will eat any food but feeding them their favorite heals for more health per item.

Finally, each time you unlock a new God alter in a region and convert a new animal follower, spend some time in God form exploring. You might notice some things you otherwise couldn’t have seen from the hero’s perspective.

Specifically, you’ll spot broken wooden totems. There will be a base located somewhere near the altar with two broken, missing pieces within reach of your God form. Put those back together and then locate three animals skulls to adorn the top and voila, it’s reconstructed. This will net you extremely valuable crafting materials that are crucial for upgrading hero gear back at the blacksmith. 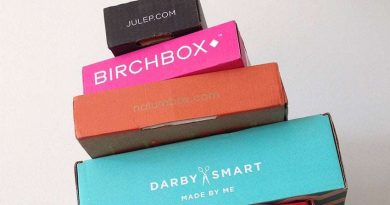 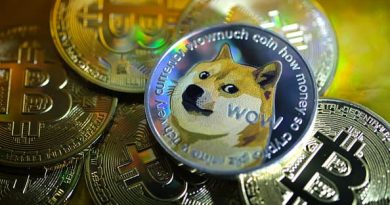 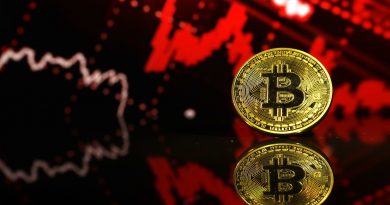 Bitcoin falls as much as 10% as risky assets tumble globally, regulatory concerns intensify