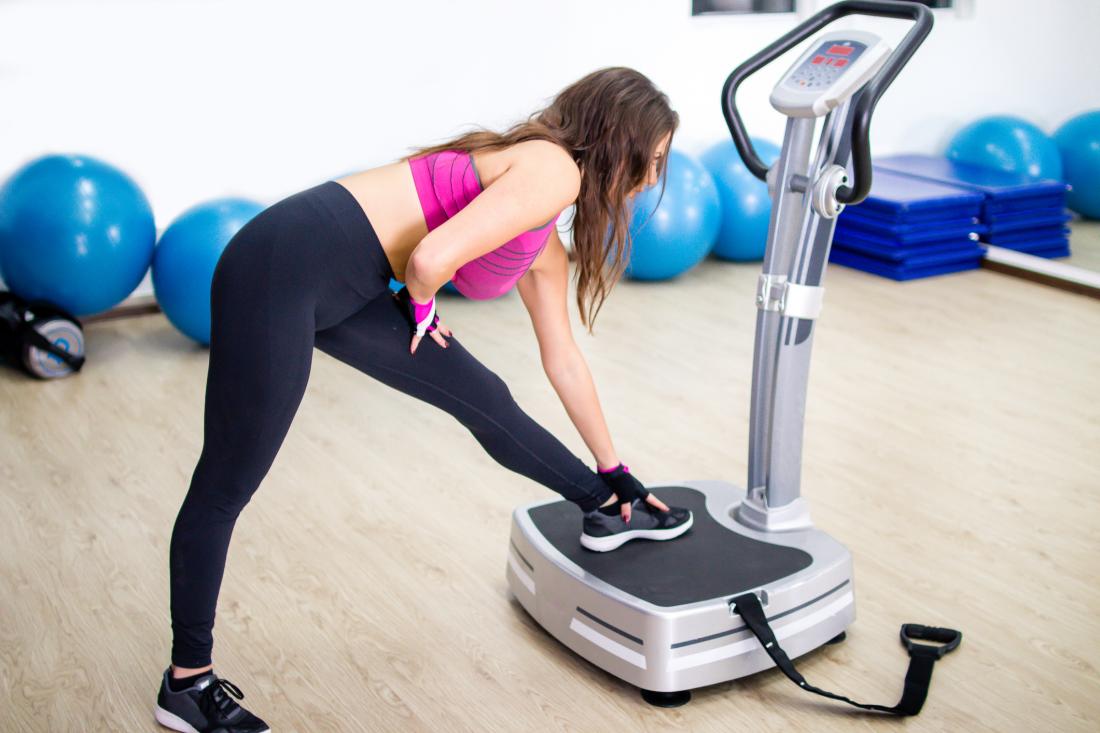 Whole-body vibration involves standing on a vibrating platform, such as the one shown here.

Whole-body vibration (WBV) is a form of passive exercise that first appeared in the late 1990s and gained popularity in the last decade as a form of fitness training.

WBV requires a person to stand on a platform that typically vibrates at a frequency of 15–70 hertz (Hz) and an amplitude of 1–10 millimeters (mm).

The human body automatically adapts to “repeated, rapid, and short intermittent exposure to oscillations” from this type of vibrating platform, which prompted researchers to classify WBV as a “light neuromuscular resistance training method.”

Research into the practice has brought to light various health benefits. Some studies have shown that WBV improves muscle performance, bone density, strength, and balance, as well as helping to reduce body fat in the long term.

Importantly, previous research has also shown that WBV can reduce inflammation and even “reverse many symptoms” of type 2 diabetes, such as frequent urination and excessive thirst.

Dr. Jack Yu, head of pediatric plastic surgery at MCG, is one of the corresponding authors of the study — which appears in the International Journal of Molecular Sciences — together with Dr. Babak Baban, immunologist and interim associate dean for research at DCG.

Drs. Yu and Baban used a standard mouse model of type 2 diabetes. This involves using mice that have been genetically engineered to have a leptin deficiency, which puts them at risk of obesity, insulin resistance, and diabetes.

For the experiments aimed at examining macrophages — that is, immune cells with a key role in inflammation and gut health — the researchers used two groups of male mice; six mice received the intervention and three served as controls.

The rodents received 20 minutes of WBV each day of the week for 4 weeks. The WBV had a frequency of 30 Hz and an amplitude of 3 mm. After the 4 weeks had ended, the team collected and analyzed the rodents’ adipose tissue.

The researchers also performed similar experiments with WBV and assessed the rodents’ microbiomes by examining their stool.

The experiments revealed various changes as a result of WBV. A crucial finding was a 17-fold increase in a gut bacterium that plays a key role in inflammation.

The bacterium goes by the name of Alistipes, and its role is to raise levels of short-chain fatty acids — compounds that lower inflammation in the gut. Previous research has found low levels of the bacterium in people with Crohn’s disease and inflammatory bowel disease, explain the researchers.

Among the short-chain fatty acids that Alistipes bacteria help release is butyrate, a metabolite of dietary fiber, which can reverse the negative effects of eating a high-fat diet.

Drs. Yu and Baban also explain that Alistipes help ferment the food in the gut and improve metabolism in general, helping the body use sugar to create energy.

Furthermore, the experiments revealed that WBV resulted in an increase in M2 macrophages — immune cells that suppress inflammation — as well as increases in anti-inflammatory cytokines, such as interleukin-10, both in mice that had diabetes and in healthy mice.

In fact, in the mouse model of diabetes, WBV brought M2 levels back to those of healthy control mice.

Finally, the researchers wanted to see whether giving the mice small doses of Alistipes as a medication and combining it with a shorter session of WBV would have a therapeutic effect.

As soon as the population of this gut bacterium increased, the ratio between pro-inflammatory M1 macrophages and anti-inflammatory M2s also improved. “The sequencing is not yet completely clear,” comments Dr. Yu, “but it appears to be a closed-loop, feed forward, self-magnifying cycle.”

Although more experiments are necessary to fully understand how an activity that mimics exercise without any of the active movement can have such a positive chain reaction, the researchers conclude that WBV can reduce inflammation and improve metabolism.