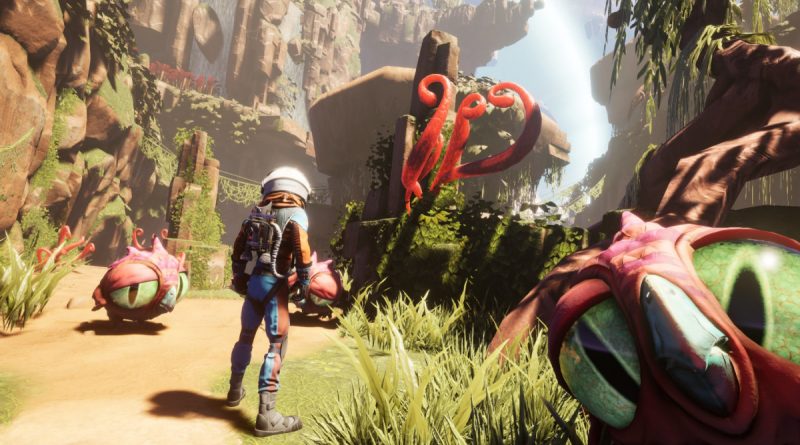 GREENTECH
April 12, 2019 ENR
Alex Hutchinson is terrified of any game that asks him to spend hundreds of hours on it. So instead of making a time-sucking, open-world role-playing game or hopping on the live-service trend, the cofounder and creative director at Typhoon Studios opted to make something he considers a bit old-fashioned.

The result is Journey to the Savage Planet, a sci-fi exploration game coming to PlayStation 4, Xbox One, and PC in early 2020 from Typhoon and publisher 505 Games. You play as a scientist working for the dubious Kindred Aerospace — its CEO likes to boast that it’s the “fourth-best interstellar exploration company” in the galaxy — and you have to find out if your assigned planet is safe and hospitable for humans. This involves cataloging bizarre wildlife, solving environmental puzzles, and discovering the purpose of a peculiar tower off in the distance.

Journey to the Savage Planet is meant to be a short but entertaining adventure that will take considerably less time to complete than a lot of the blockbuster games seen today.

“We think there’s a big opportunity for a focused, really high-quality slice of what would traditionally be considered a triple-A experience,” Hutchinson said in an interview with GamesBeat.

Hutchinson knows a thing or two about making triple-A games. Two years ago, he left his job at Ubisoft — he was the creative director on Assassin’s Creed 3 and Far Cry 4 — to join up with some of his old colleagues (who worked at places like EA and Warner Bros.) to form Typhoon Studios in Montréal. It now has 25 people on the team, most of whom are triple-A vets, including fellow cofounders Reid Schneider (executive producer) and Yassine Riahi (technical director). Both men worked with Hutchinson at EA years ago, and they most recently worked on the Batman: Arkham series while at WB Games Montréal.

During the 2019 Game Developers Conference, the trio showed off Journey to the Savage Planet in a new hands-off demo. While the game benefited from the team’s collective years of experience in terms of making crucial design choices and quickly building content, it’s also the antithesis to the bigger-is-better mentality that their former employers are so fond of. 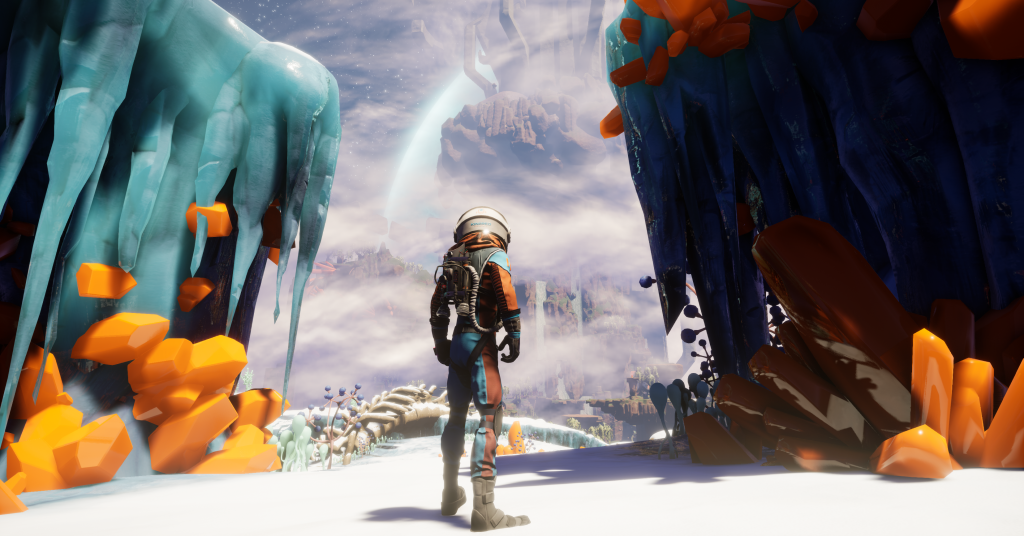 Above: It’s safe to say that Kindred has no idea what that ancient tower is used for.

The developers hope that Journey to the Savage Planet’s bright palette and optimistic tone will give the game a distinct identity. The alien planet (known as AR-Y 26) has four different biomes, each with its own set of flora and fauna. While some animals can be vicious, most won’t harm you if you leave them alone — if they do, you can use your space pistol (the only gun in the game) to kill them. Inspired by the so-called golden age of science fiction, the studio wanted to portray an aspirational future for humanity, albeit one viewed through a comedic lens.

Some of this comes through in your enclosed habitat, which serves as your HQ. Whenever you return home, you’ll find humorous live-action videos playing on one of the monitors, which can either be messages from Kindred or just silly infomercials. It’s one of the many ways the team is trying to make this strange universe feel more inviting.

Schneider said that Hutchinson used the word “charm” a lot in the early days of development, referring to how the world should have a sense of wonder and charm so that players feel compelled to explore it.

“Growing up with the Amiga 500 and Super Nintendo, the games always had this optimistic feel. These days, everything is so grim,” said Hutchinson. “You’re always escaping the apocalypse. So [I wanted] to bring back some sense of joy that I had playing games and not knowing what you were gonna find.”

While you’ll have overarching goals to accomplish, it’s up to you to figure out which one to tackle first and how you’ll do it. More objectives may pop up after scanning specific creatures or plant life — in the demo, one such discovery led to the grapple blueprint. At that point, your journal will tell you the ingredients needed to make the grapple, but it won’t tell you where they’re found. If you do manage to gather those materials and craft the tool using your habitat’s 3D printer, you can use it to reach previously inaccessible areas. 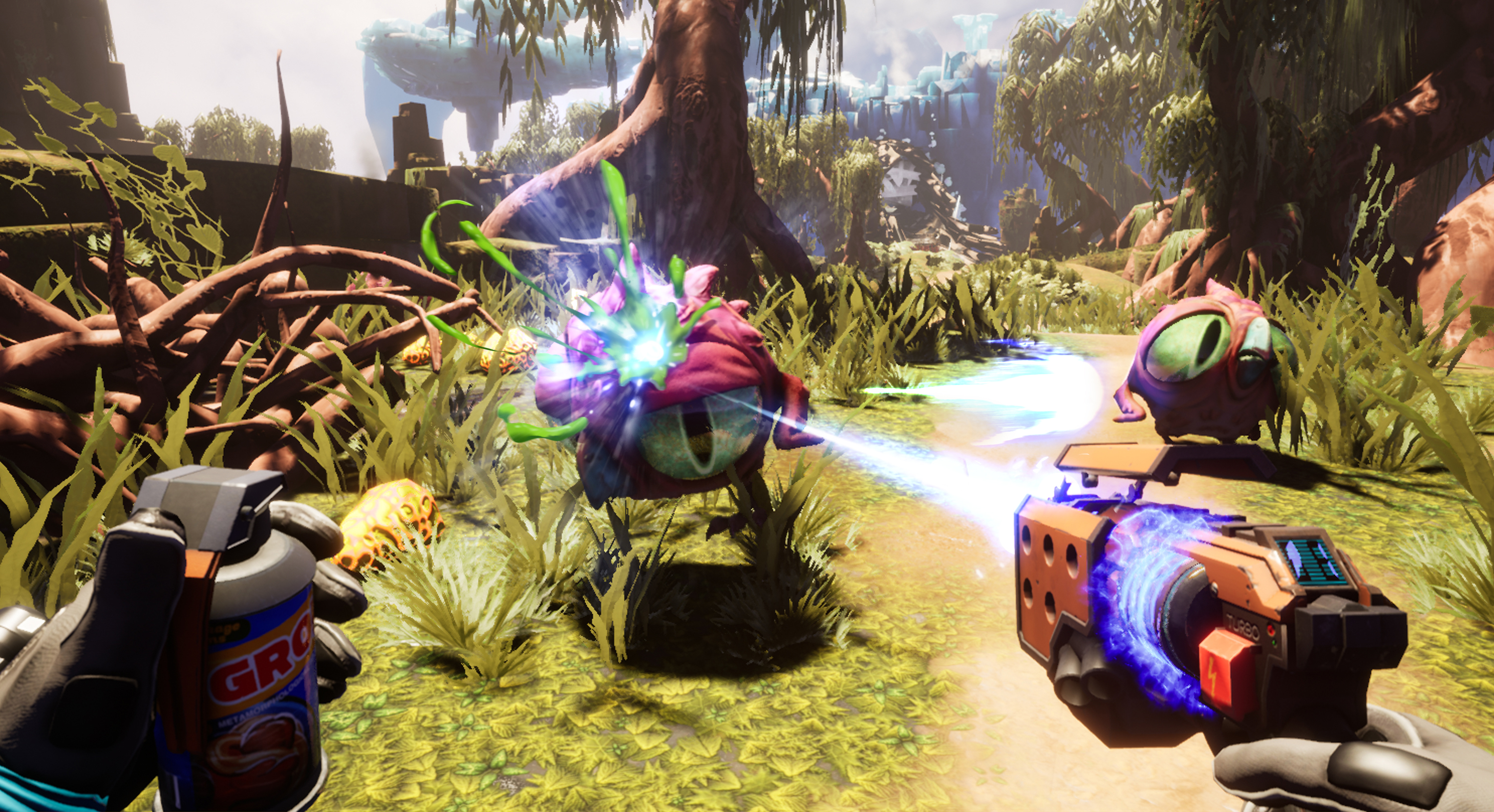 Above: Your pistol works like a Super Soaker: cranking the gun will increase its power.

The creative director explained that instead of excessively guiding the player or overwhelming them with too many missions, they thought it was best to let them carve their own path and find the answers themselves. This also gave the developers a good excuse to stuff the planet with as many secrets as possible.

“At Ubisoft, we used to have a joke that any hidden content is wasted content because if you put it there, you want people to play it. We’re breaking that rule on this game by putting most of our content as hidden content. Everywhere you look, you should be finding little secrets and little reasons to invest in the world,” said Hutchinson.

In addition to representing a bygone era of games, Journey to the Savage Planet is Typhoon’s attempt at getting back to the basics of development. Hutchinson, Schneider, Riahi, and many of their colleagues have all been part of big teams over the years. At that level, it’s difficult to directly influence certain parts of a project or leave your own personal touch on it.

But when you’re an indie studio with only a few dozen people, it’s much more realistic and often necessary to utilize everyone’s talents to make the game.

“We wanted to have more people involved in more of the game, instead of everyone being splintered off into tiny groups,” Hutchinson said. “So the idea that we as a team made [Journey to the Savage Planet] — that comes with all the attendant excitement and challenge because lots of people are getting exposed to parts of development they’ve never seen before, or realizing how risky it is and how difficult it is. But that’s also part of the satisfaction of growing as a team and getting a core group of people together.” 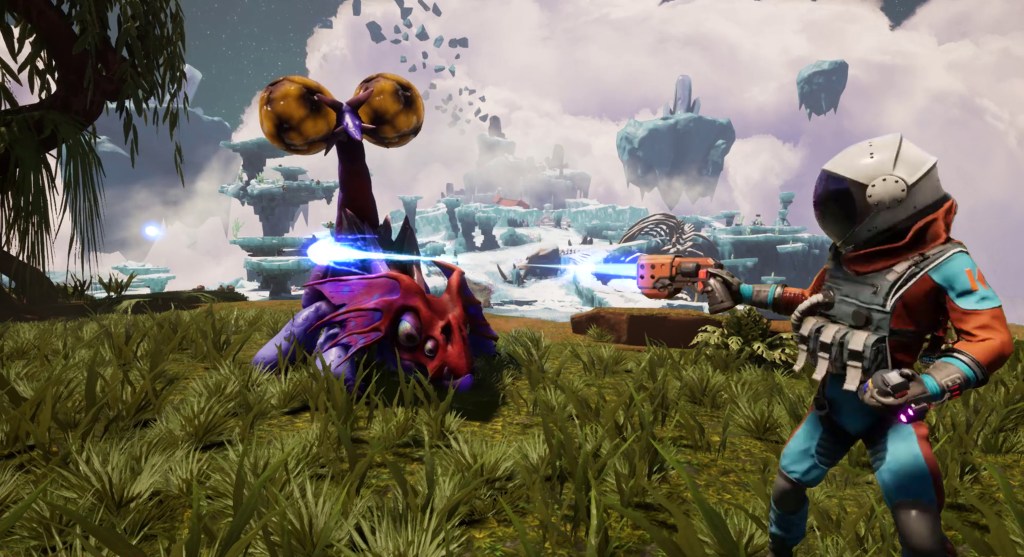 Above: Violence isn’t the focus of the game, but in some situations, you’ll be forced to defend yourself.

“Triple-A [development] is all about ending up with these hyper-specializations. … The whole world [in the game] is hand-crafted. It’s really important to us that everyone on the team is touching all of the content. We’re not doing procedural [generation], it’s not infinite. It’s about making a custom-crafted world and giving the player interesting tools,” Schneider added.

After years of making giant games, it’s almost a relief for the team to make a smaller, tighter experience. Journey to the Savage Planet won’t best Ubisoft’s massive open-worlds or provide an endless amount of replay value, but that’s okay. The most important thing is that it’s the kind of game that, Hutchinson said, older players like himself with families and kids can actually finish. 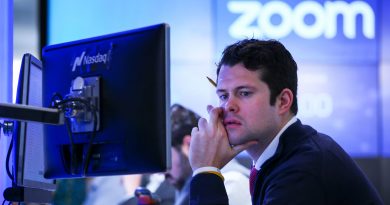 The worst-performing tech stocks this week suggest the U.S. is done with Covid lockdowns 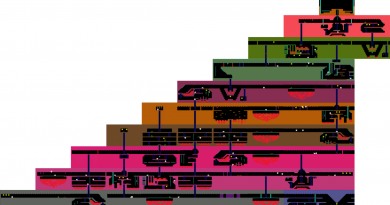