New research finds that an extract from the Yerba santa plant may prevent brain cell death in people with Alzheimer’s disease.

This was the conclusion that scientists at the Salk Institute for Biological Studies in La Jolla, CA came to after testing 400 plant extracts with known medicinal properties.

Using a new drug-discovery screen, they tested the compounds for their ability to deter the effects of aging on the brain.

The initial round of tests yielded several extracts that protected against a type of cell death that occurs in Alzheimer’s and other aging-related diseases.

Further tests revealed that sterubin, an extract of Eriodictyon californicum, or Yerba santa, was the most able to shield against inflammation and other triggers of brain cell death.

Native tribes of California have long valued Yerba santa, which is the Spanish for “holy herb,” very highly as a medicine for respiratory illnesses, fever, infections, bruising, pain, and headaches.

The researchers describe their findings in a paper that now features in the journal Redox Biology.

“Alzheimer’s disease,” says corresponding study author Pamela Maher, who is a senior staff scientist at the Salk Institute, “is a leading cause of death in the United States.”

“And,” she adds, “because age is a major risk factor, researchers are looking at ways to counter aging’s effects on the brain.”

She notes that their “identification of sterubin […] is a promising step in that direction.”

Alzheimer’s is a disease of brain tissue that results in the irreversible and progressive death of cells. It is the most common reason why people develop dementia.

As yet, there are no treatments that cure or stop Alzheimer’s disease, although some can slow or delay the progression of symptoms for a while.

According to a 2018 Alzheimer’s Disease International report, dementia affects 50 million people worldwide, two-thirds of whom have Alzheimer’s disease.

In the U.S., the number of people living with Alzheimer’s disease is set to rise from approximately 5.7 million people today to nearly 14 million by 2050.

Although there are some exceptions, Alzheimer’s disease most commonly strikes older people, making increasing age the most significant risk factor.

The changes to the brain that occur in Alzheimer’s disease begin a long time before dementia symptoms, such as memory loss, emerge.

The “prime suspects” behind the changes are toxic plaques of beta-amyloid protein that build up between nerve cells and toxic tangles of tau protein that accumulate inside the cells.

Much of the research and development behind treatments for Alzheimer’s disease tends to focus on these and other hallmarks and how to stop them.

However, as the authors explain in their study paper, because age is “by far” the most significant risk factor for Alzheimer’s disease, there must be “a strong rationale for an alternative approach to drug discovery based upon the biology of aging.”

The researchers proposed that a screening tool should be able to test for multiple, aging-related pathways that kill brain cells “rather than single molecular targets.”

In previous work, the researchers had used a screening method to identify plant flavonoids that could reduce inflammation and protect nerve cells.

From this, they developed a screening tool comprising tests, or assays, that do more than just identify compounds that might protect cells.

They suggest that the new tool can also identify the “target pathways” of these compounds, possibly making them available as new molecular targets for drug developers.

The team first tested all 400 plant extracts for their ability to deter oxytosis in “mouse hippocampal nerve cells.” Oxytosis is a type of cell death that occurs in Alzheimer’s disease.

Extracts that passed this test then underwent further tests. These examined the compound’s activity in a number of aging-related nerve cell function and survival pathways that are “directly relevant” to Alzheimer’s disease. Some of the tests used mouse cells, while others used human cells.

One of the reasons that sterubin stood out was because it showed a strong ability to reduce inflammation in microglia, which are brain cells that provide support to nerve cells.

Sterubin also showed an ability to remove iron from cells. Accumulation of iron can lead to a type of nerve cell damage that accompanies aging and that occurs in neurodegenerative conditions.

The investigators now plan to use an animal model to determine sterubin’s drug properties and safety levels in animals.

From there, they could test it in humans. To do that with a natural extract, however, it would have to come from plants that grow under controlled conditions and then undergo purification.

Maher suggests that the more likely way forward would be to make synthetic versions of the compound.

Causes and treatment of a split lip 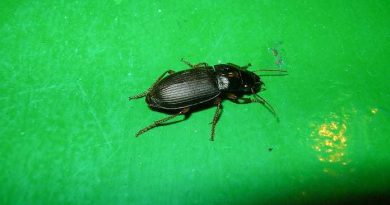 Are edible insects a healthy alternative to traditional meat?